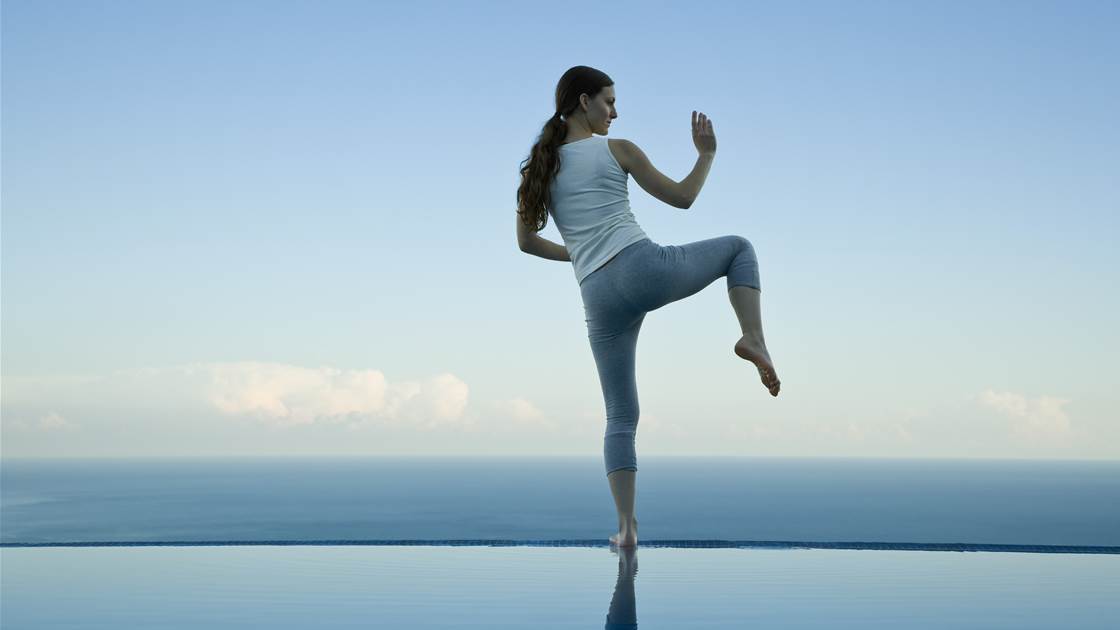 We’ve all been told to move more, but if you have a limited range of motion, Tai Chi can help you reach your fitness goals—and reap other benefits too. It’s a traditional Chinese wellness practice comprised of a series of movements that you perform slowly and purposefully. It’s been popular for centuries for a reason: It has a host of benefits, including helping you maintain a healthy weight and blood pressure, improve heart health and immune function, and lower your risk for falls.

What is Tai Chi?

Tai Chi translates to Grand Ultimate, and it was originally developed as a martial art. “It originated in the thirteenth century and is a non-impact exercise that helps people understand and feel their postural alignment through slow careful moving,” explains Betty Chewning PhD, a Tai Chi researcher. “It also enhances your body awareness, balance, coordination, strength, and flexibility.”

Tai Chi is very different from the seemingly similar practice of yoga. “Tai Chi and yoga are both mind-body exercises, but they stemmed from different culture and philosophy,” explains kinesiologist Parco Siu PhD.

Who should try Tai Chi?

Tai Chi practice is often suggested for older adults—it has a well-deserved reputation for improving balance and preventing falls. But experts agree that the benefits go far beyond balance, and anyone and everyone should give it a try.

“I recommend anybody of all ages and occupations try Tai Chi,” says registered nurse, Ruth Taylor-Piliae PhD. “Tai Chi is a flexible, adaptable form of exercise for anyone.”

Tai Chi is even acceptable for those with little or no athletic background. “Tai Chi is known to be a suitable activity for older people, including those who are not active,” Siu says.

How to get started in Tai Chi

When you decide to try out Tai Chi, find a flat, open space to perform your movements and plan on a specific time to practice, explains Chewning, who has been practicing daily Tai Chi for nearly 48 years.

You’ll want to find a personal practice or group class that works for you. You can commit yourself to hour-long classes, but even five-to-10 minutes a day of regular Tai Chi can benefit you, she says. That’s enough time to perform the “fab four basic moves” that her research has found reinforces daily practice and produces positive health results.

If a class setting is appealing to you, look for groups who practice together at a community center or an online course if you are in lockdown. If you’re looking to commit to a longer class format, start with twice a week for an hour for three-to-four months for maximum benefits, says Taylor-Piliae. “Don’t be afraid to try different classes,” she urges. “Find a group and teacher that works for you.”

The health benefits of Tai Chi

For those who aren’t keen on high-intensity aerobic exercise for weight loss, Tai Chi may be their answer. Research published in the journal Annals of Internal Medicine followed adults over 50-years-old to determine how Tai Chi practice would affect their health. The 543 participants were broken into three groups of no exercise, conventional exercise of brisk walking and light strength training, and Tai Chi practice for one-hour instructor-led workouts three times a week for 12 weeks.

“Our study showed that Tai Chi mirrors the beneficial effects of conventional exercise by reducing waist circumference in middle-aged and older adults with central obesity. Although Tai Chi is a gentle mind-body exercise, our findings suggest that Tai Chi is an effective approach for management of central obesity. Nonetheless, regular Tai Chi practice can be considered an approach for people to adhere to the World Health Organization physical activity recommendations,” says Siu, lead author on this study.

In a small study published in the Journal of Holistic Nutrition, 10 participants took part in a 12-week Tai Chi course, and researchers measured their pain intensity, cognition, emotional state, and physical function with questionnaires. The study determined that Tai Chi could be used as a treatment for musculoskeletal pain and post-traumatic stress disorder. A larger randomised controlled trial published in the peer-reviewed journal BMJ found that of 226 adults suffering from fibromyalgia, those who participated in Tai Chi had equal or greater improvement in symptoms compared to those who performed traditional aerobic exercise.

Tai Chi has a greater impact on your heart than you might think for such a slow form of movement. A recent randomised controlled trial published in the journal Heart & Lung found adults with hypertension who trained Tai Chi for six months had significantly lower blood pressure and body mass index compared to those receiving their usual care for hypertension.

An additional meta-analysis published in the journal PLOS ONE examined 20 small-scale studies that looked at Tai Chi’s impact on heart health. The results suggested Tai Chi may be effective in improving cardiorespiratory health in adults. 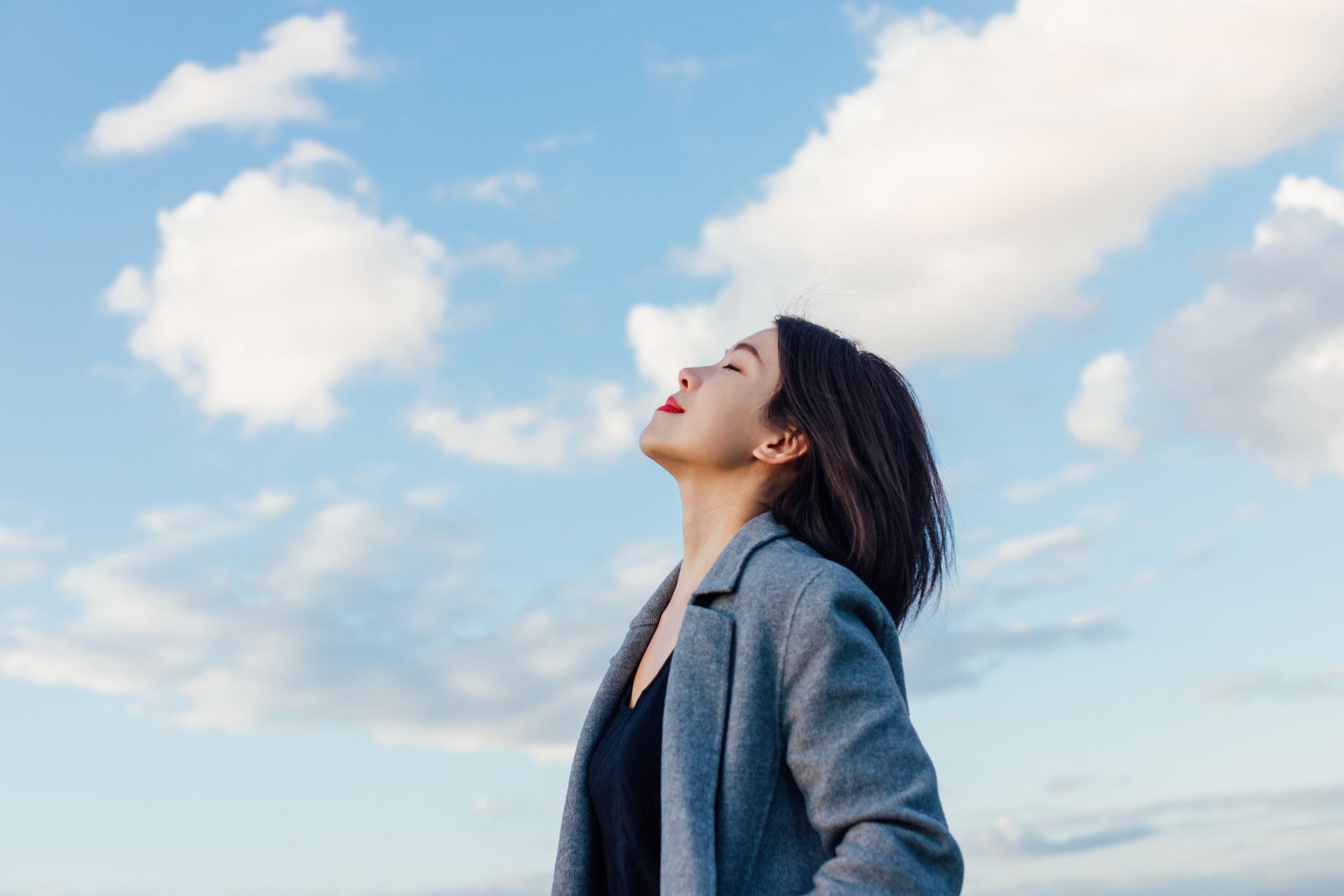 Exercise has long been tied to improved mental health, and Tai Chi may be the mind-body workout you needed to boost your mood and encourage a healthy mental state.

A recent meta-analysis published in the European Journal of Cardiovascular Nursing reviewed 15 studies that used Tai Chi to improve psychological well-being. When Tai Chi was compared to control groups, researchers saw an improvement in quality of life, mental health, and physical health. Additionally, they noted less depression and psychological distress among participants.

“We found that after the intervention, there were significant reductions in depression, anxiety and stress, and improved sleep,” says Taylor-Piliae, lead author on the study. “Tai Chi can be another tool in the toolbox, especially for people who have depression, anxiety, and stress. It’s something that can be used alongside conventional healthcare, like medications and psychotherapy, for people struggling to adhere to traditional kinds of care.”

“It’s pretty well-established Tai Chi is great for balance, muscle strength, and physical health,” says Taylor-Piliae. Studies back this up: A randomised controlled trial published in the journal Gerontologist asked participants to take a six-week modified Tai Chi course. The results surprised the researchers, according to Chewning, an author on the study. They found participants reported practicing Tai Chi for 25 minutes a day for six day per week (more than the researchers expected), and self-reported better leg strength, balance, mobility, confidence, and functioning compared to the control group, she says. The National Institute of Health also touts Tai Chi as an effective option to improve balance, stability, and more in older people.

Research that looked at both Tai Chi and Qigong (a similar practice) found a wide variety of benefits, including improved immune functions. The review of research, published in the American Journal of Health Promotion, noted an improvement in antibody numbers after vaccinations, T-cell increases in response to vaccinations, and number of immune-related blood markers. (The research also supported many of the practices’ other benefits, such as improved bone density and cardiopulmonary functioning, a decrease in falls and related risk factors, and more.)

Though Chewning’s research was focused on fall prevention, researchers found cognitive functioning was also improved throughout the experiment. “We found at the end of the six-week period that the scores were significantly higher for those who were in our Tai Chi course group than for the control,” she says.

An additional review published in The Journal of American Geriatrics Society examined 11 studies for improvements in cognition in adults who participated in Tai Chi, compared to those who did not. The findings concluded that Tai Chi may have a positive effect on cognitive functioning in older adults without known cognitive impairment.

A randomised trial published in the journal BMC Complementary and Alternative Medicine of 86 osteogenic (weaker than normal bones) women aged 45 to 70 were assigned either usual care or the addition of Tai Chi for nine months. Those who performed Tai Chi improved their bone density, postural control, bone formation markers, and quality of life. Researchers concluded Tai Chi is a great option for reducing fall and fracture risk.

Tai Chi has long been associated with improving energy levels, and one study published in the Journal of Pain and Symptom Management examined how Tai Chi affected the energy levels of cancer-related fatigue and autonomic nervous system balance in cancer patients and survivors. Through a randomised control trial, participants practiced Tai Chi for five one-hour sessions. Scientists found those who had usual care and Tai Chi practice experienced lower general, physical, and emotional fatigue, compared to those who only received usual care.

Catch some Z’s with regular Tai Chi practice. Research published in the journal Nature and Science of Sleep had 75 adults, ranging for 18 to 40-years-old, participate in 10 weeks of in-person or video Tai Chi twice a week or regular anxiety management handouts. Scientists examined the participants’ anxiety and sleep quality and found those who participated in Tai Chi had significantly lower levels of anxiety and greater improvements in sleep, compared to the control group.

Additionally, a systematic review and meta-analysis published in the Journal of Sleep Disorders and Therapy found nine randomised trials reported Tai Chi significantly improved sleep after up the three hours a week of six to 24 weeks of practice.

I have read and accept the privacy policy and terms and conditions and by submitting my email address I agree to receive the Prevention newsletter and special offers on behalf of Prevention, nextmedia and its valued partners. We will not share your details with third parties, and will only share delivery information in the event of you being a prize winner.
This article originally appeared on prevention.com
© prevention.com
First published: 4 Sep 2021
Tags:  fitnesshealthnutrition/wellness