Grab two glasses of wine, order some take-away, and snuggle up with these classics. 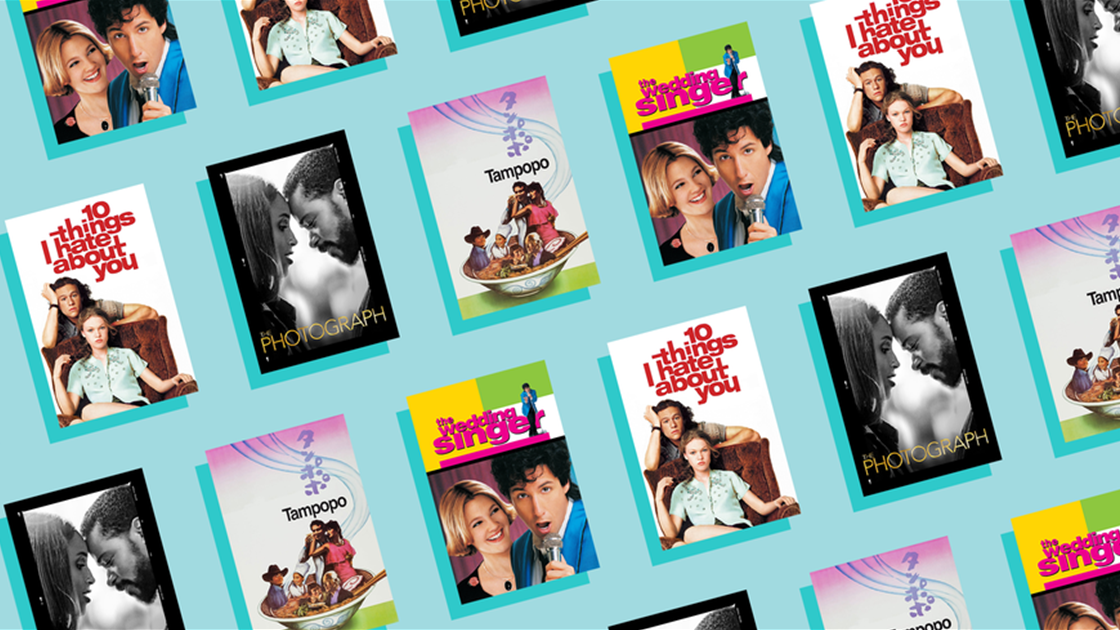 Sometimes, the most romantic evenings are the ones spent at home. Dinner reservations and fancy cocktails are great, of course, but finding the energy for it all is often the last thing you actually want to do on a Friday night. That’s where date night movies come in!

Instead of searching for parking and waiting for the bill, you could be at home on the couch, cuddled up to your beau, watching a familiar favourite (or future classic)!

Plus, it’s a COVID-friendly option for those who are in lockdown. The best date night films aren’t too involved—because we know you might not actually watch most of it—and end on a light note, since bawling in the middle of your big evening isn’t exactly the right vibe. Plus, most importantly, they should be interesting enough to keep anyone’s attention, from the sappiest romantics to those that are the least sentimental.

Settling on the right movie can take almost as long as the feature itself, especially if you have multiple streaming services. In an effort to give you more time with your boo we’ve done all the work for you—this list has something on it for everyone! Whether your feeling a classic romcom (like When Harry Met Sally or Notting Hill), a romantic epic (like The Bodyguard or Love & Basketball), or a brand-new discovery (like The Photograph and Summerland), you’ve come to the right place.

Slip on your PJs, order some take-away, grab a bottle of wine, and stream one of these top-notch date night movies:

What more can be said about this 1989 must-watch? It’s the best romantic comedy ever made, featuring classic scene after classic scene, and it’s just as hilarious as it is heartfelt. Can’t decide what to watch? Just put this one on.

Time-loop movies (see also: Groundhog Day, The Map of Tiny Perfect Things) are perfect for romance. We love Palm Springs because it’s bright and charming without being afraid to get a little dark—and we know you’ll get a kick out of it, too.

Kind of like the romantic drama version of ASMR, this quiet, charming movie boasts incredible chemistry between Issa Rae and Lakeith Stanfield, plus a soothing soundtrack and little conflict. It’s best enjoyed with a cup of tea next to your boo.

When a wedding singer is left at the altar, he loses hope for romance—until he meets another bride-to-be, that is. Will he win her affections before her big day? You’ll have to watch to find out.

Go obvious on your next date night: Date Night is better than you remember! Steve Carrell and Tina Fey excel as a pair of suburbanites getting swept up in a dangerous New York City scheme—and basically every side character in this movie is played by a now-famous person, meaning you’re in for a game of I Spy, too. Plus, this movie is just generally hilarious.

Despite having the amazing ability to travel in time, Tim can’t make his relationship with Mary perfect—and that’s the point. A perfect metaphor for regular relationships, About Time serves as a reminder that even if you don’t get everything right, life with your spouse is still pretty great. (Fair warning: You might get a little weepy—but with happy tears, at least!)

This movie is so much more fun when you don’t think about how messed-up it is—so we won’t go into plot specifics! All you need to remember is the electric chemistry between real-life sweethearts Goldie Hawn and Kurt Russell.

Who wouldn’t want to date a movie star? The reality isn’t as glamorous as you’d expect—especially with a roommate like Spike—but Julianne Moore and Hugh Grant make it look like heaven.

Romance is hard work, and many movies skip over that fact—but not the charming, sexy Love & Basketball. Two basketball players share a passion for the sport and each other, and it’s not always clear which comes first.

Is it possible to fall in love in less than 24 hours? Based on Before Sunrise—the delicious, almost real-time tale of two young strangers spending one perfect day together in Vienna—you absolutely can.

Ang Li’s epic boasts some incredible martial arts (plenty to keep anyone plugged in throughout the movie), but the real draw is the romance between its four leads—tragic, yes, but also beautiful.

Just Wright is ostensibly about a physical therapist falling for a pro basketball player. However, it’s really a chance to watch Queen Latifah and Common be cute and funny for 100 minutes.

Love makes no sense—just ask Cher and Nicolas Cage, who, despite being completely unlike the leads of basically every other romcom, wind up in one of the greatest movie romances of all time. Just don’t watch this on an empty stomach.

16. Portrait of a Lady on Fire

If you somehow missed this modern masterpiece when it hit theaters, now’s your chance to catch up—hopefully while sitting next to your significant other. Marianne is hired to paint Héloïse, but the two get much closer than artist and subject, to say the least.

As much a love letter to food as it is to romance, Tampopo follows a so-so ramen chef as she learns the art of cooking—and falls in love along the way. It’s bonkers (we especially love the old woman aggressively feeling up fruit in an empty grocery store), but definitely worth your time.

If you’re looking for a spectacle on date night, go with Crazy Rich Asians, which follows a regular American student as she’s thrown headfirst into the luxurious lives of Singapore’s elite. Plus, Henry Golding and Constance Wu make one of the hottest couples in recent memory.

Date night movies don’t get much hotter (or action-packed) than this modern classic, which pits Angelina Jolie and Brad Pitt against each other as rival assassins who happen to be married. It’s pretty much guaranteed that neither of you will wind up bored. At least your spats never get this bad!

Look, no one is saying that this is the best movie ever made. But if you’re looking for a bit of titillation on date night, well, it might be time to visit Christian Grey’s office.

Arguably the best teen movie of the 90s, this adaptation of Shakespeare’s The Taming of the Shrew is still just as funny and romantic now as it was over 20 years ago. We can all agree on Julia Stiles and Heath Ledger, right?

Is there any better teen movie moment than John Cusack holding the boombox over his head to win over Ione Skye? Absolutely not—looks like you’ll have to watch Say Anythingagain!

When George Banks learns his beloved daughter, 22-year-old Annie, has returned from Europe with a fiancé, he tries not to lose his mind—or his savings. Whether you relate more to father or daughter, you’ll love the relationship at the center of the movie.

I have read and accept the privacy policy and terms and conditions and by submitting my email address I agree to receive the Prevention newsletter and special offers on behalf of Prevention, nextmedia and its valued partners. We will not share your details with third parties, and will only share delivery information in the event of you being a prize winner.
This article originally appeared on prevention.com
© prevention.com
First published: 13 Sep 2021
Tags:  entertainmentliferelationships