Stepping Out With Julia

She’s had a birthday since we last spoke with her and a major change in attitude – now she’s not only funny and fearless but feeling happier in her self than ever before. 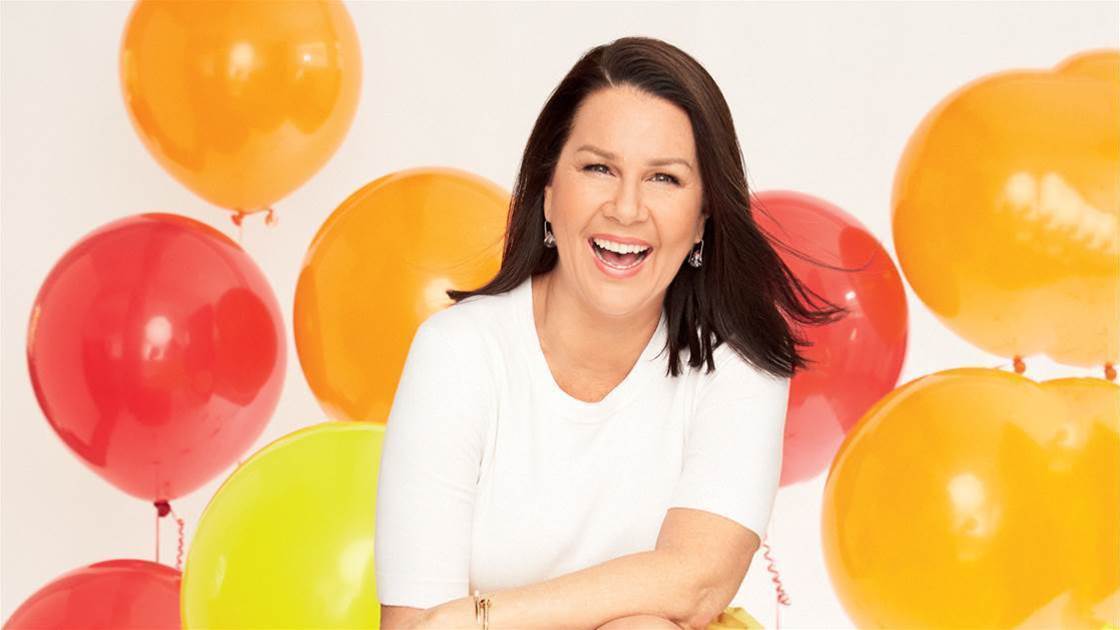 When we meet, Julia is on a seven-day publicity tour and yet she has packed 10 pairs of sneakers in her suitcase. “It sounds like a bit much doesn’t it?” she asks, almost looking for reassurance.  Well yes, for most people, but then this is even more bizarre when you consider Julia Morris, until now, was the heel queen, possessor of a collection of designer stilettos so vast she could open her own shoe gallery.

Yet today she arrives in a chic navy jumper, figure-hugging navy pants and a pair of flat trainers, admittedly very fancy ones in dusty pink with translucent soles.

“Sneakers are now a big running theme in my life,” she explains. It’s as if the shoes express the significant shift that’s been taking place in Julia; a new sense of comfort – not just in her feet, but in her own skin as well.

But back to the feet, last year a dramatic golf cart incident in which she put out her foot to stop the golf cart she was in from plunging down a cliff, has left her with ongoing foot pain.  “So last year I started to break up with heels and then very slowly, but surely, every time I buy an outfit, I’d find a pair of trainers in a colour to complement it.”

Julia is a woman of big enthusiasms and you get the feeling the 10 pairs on tour right now are just the tip of an Everest of laces and rubber soles in Julia’s shoe closet. But her great passion for shoes is matched in scale by her other enthusiasms, whether it’s her capacity for seeing life’s funny side, or her generosity to her friends and those around her. Julia is one of life’s givers. She is fun to be around, and it’s not hard to see why she’s become one of our most beloved, and funniest, TV stars, with a string of hit TV shows such as Blind Date, I’m a Celebrity… Get Me Out of Here and the new variety program Chris & Julia’s Sunday Night Takeaway.

At 50, Julia is at the very pinnacle of her career. And her age is something she owns with great pride. “I feel like I’ve been telling everyone for two or three years that I’m in the underarm of 50. So turning 50 was really exciting for me.

“Through my 40s I was a bit panicky about ageing. I started to notice in photos that I was looking a little bit older and I didn’t feel like I was looking as good in clothes, so I decided to get Botox and I lost a bit of weight. But when I got to 49 I thought, ‘There is no point in trying to look like the younger people in the room and being the oldest person. I may as well start to embrace the other side, which is being the youngest person in an ageing group.’ And all of a sudden, now I’ve switched my thinking around, I don’t feel so bad.”
The benefits of owning her age, she explains, are that “I’m not as hard on myself. My waistline is wider than it was this time last year, and I don’t care.”

That relaxed, ‘whatever-makes-me-happy’ attitude extends right through Julia’s life. For
her milestone 50th birthday, she says, “I kept the children home from school and we made an enormous cake. Then we got dressed up and we ate the cake for dinner. It was my favourite birthday ever!” her eyes twinkle at the memory. “We laughed, we had such a good time!”

All in the family

Strong family values underpin Julia’s priorities. She keeps her daughters, Sophie, 10, and Ruby, 12, strictly out of the public eye. And her husband, Dan Thomas, is the rock that keeps her grounded.

“I know in the celebrity world you can’t afford to fall into the trap of finding yourself too fascinating,” she says. “I remember when I was doing House Husbands and Australia’s Got Talent back-to-back, Dan said to me, ‘This is where the chasm starts between real life and how you are going to be treated and spoken to outside of this house. So, outside of this house you’ll be the funniest person anyone has ever met, your ideas will be amazing, you’ll be this great icon… and then you’ll come back into this house and have to unpack the dishwasher. So this is going to seem like we’re disrespecting you, but we’re not: we’re the real side.’”

Julia is fond of quoting his words. “Because as the success grows, you do go into that world. And I try not to notice it and abuse it.”

As Julia’s star becomes white hot, she acknowledges that striking a balance between career and home life is an ongoing challenge. Recently she and Dan relocated the family to Sydney after living in Melbourne for six years, so Julia could spend less time on planes and more with her family.

“Maybe when they were smaller I wasn’t as fussed about being away for the odd night, but now I simply don’t like it. I know they need me, I know they need my advice. There’s no point me being a good bird and not passing that onto the humans I’ve brought into the world.”

At the same time as being a good mum, Julia wants to enjoy the career success that she has worked so hard for. “There have been times when the girls have said to me, ‘Why do you have to go to Africa?’ And I say to them, ‘Well, my work is an important part of who I am.’ All of that work-life balance stuff is bulls***. That doesn’t exist, it’s just a bumper sticker. There is no such thing.

“If I’m working and away from my family, I can’t even count the kisses and cuddles that I’ve been missing out on.”

But Julia’s not after pity. “Last night a girlfriend was saying to me, ‘It’s so full on for you!’ But she’s a teacher, a single mum, and she is telling me that I’m busy! Just because my work is a bit more obvious… I kind of feel like everyone I know is working as hard as I am.”

Nonetheless Julia has found a calmer acceptance of life’s stresses than she had several years ago. “Like any trauma, I think it’s easier to talk about afterwards,” she reflects. Last time she spoke with Prevention she was overwhelmed by what she now calls “the menopausal rage!” she says, dropping her voice theatrically into a growl.

“As the fury would rise in me, I could bash someone to death. No trouble! Sure I would have the stench of regret, but that’s how overwhelming the fury was. And when I talk to my girlfriends it feels like they have all had that anger through menopause.

“Even for something as simple as photographic shoots, I used to be very particular about needing to see the colours of the clothes and to see every single photograph. How dare they not ask me what I think. I would have days of fury! So I went to see a psychologist and said to her, ‘I think I’m going nuts’.”

Therapy has helped Julia manage the thoughts that would send her into a tailspin. “I’ve come to realise that, you know what? I’m only going to look a little bit better or a little bit worse in the photos than I already look, so does it really matter?”

And as if to prove her point she throws her hands up in a gesture of surrender and says to our photographer, “I know you’re going to look after me and make me look fabulous.” And true to her word, she barely looks at the images on the photographer’s computer during our shoot.

“I now get angry about stuff that’s warranted. I’m not up in that high-octane fury all the time
like I was in for years until I sorted that out.”

The surprise, she says, is that she likes herself more. “And I think everybody else does, too.”

So that big beaming Julia smile has never been more real, or more heartfelt. It’s the happiness of arriving at being comfortable with who you are. For Julia, there’s a great sense of ease in being 50. She reflects back on “The panic stations of your teens and your 20s and 30s of, ‘Am I going to financially survive? Will I ever have a home of my own? Am I going to get married? Will I have children?’

“I feel like I am on the other side of a lot of those [anxious] questions. But I’m not a forward planner in the sense of ‘in the next five years, what do I want to do?’ I just want to make sure that I can continue working because I love it. It’s a big part of who I am. At the same time I am raising two women.”

“It was very exciting, because we just kind of go to the jungle, we chip away, we work like dogs, and we don’t really notice what people’s responses are.”

As a result of her YouTube fame, UK fans began lobbying to have Julia replace one of the judges on the long-running British version of the series.

“Then I got a personal message from James Corden [the British host of a US late-night talk show] saying ‘If you’re ever in the States please call me, I think you’re hilarious’.”

But Julia has no plans to call him back. “In actual fact the excitement about doing something like that feels the same to me as the anxiety of getting into trouble. I don’t respond well to that at all. I’ve always been a real goody-goody!”

The world’s loss is surely our gain. Long may Julia, the queen of comedy, reign.

I have read and accept the privacy policy and terms and conditions and by submitting my email address I agree to receive the Prevention newsletter and special offers on behalf of Prevention, nextmedia and its valued partners. We will not share your details with third parties, and will only share delivery information in the event of you being a prize winner.
This article originally appeared on prevention.com
© Prevention Australia
First published: 3 Jun 2019
Tags:  australian celebrity newscomediancomedienneim a celebrityjulia and chrisjulia morris

Out-Of-Whack Hormones Were Exhausting Me, Thinning My Hair And Making Me Gain Weight