The calming, curative effects of getting outside are very real. 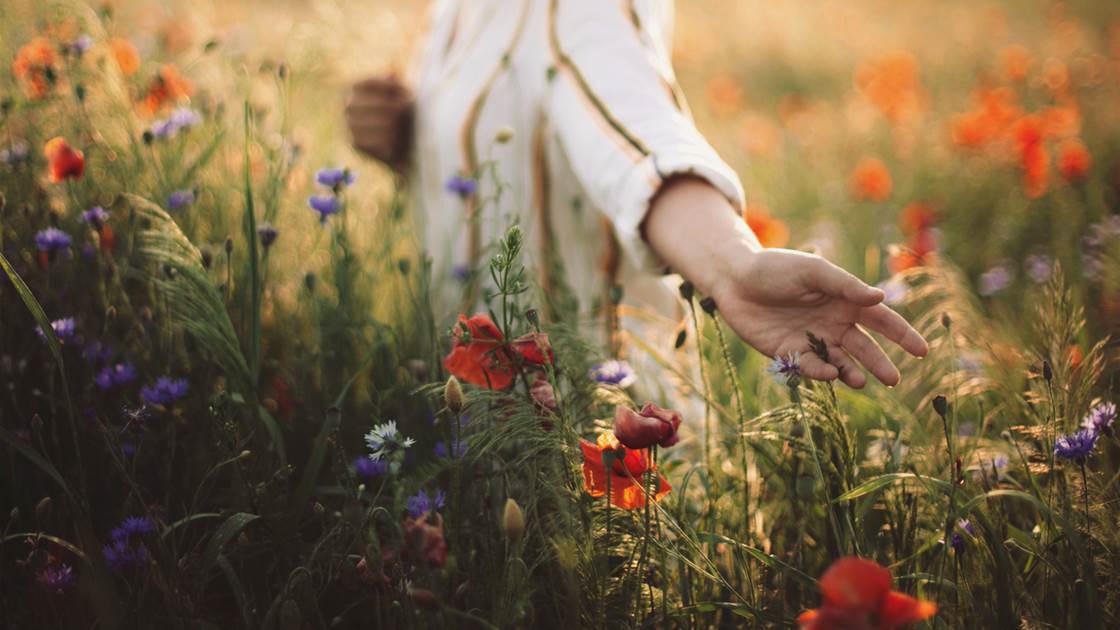 Study after study over the past two decades has confirmed that green spaces, water, and sunlight confer health benefits that range from improved healing rates after surgery and strengthened immunity to decreased chronic pain.

Check out how scientists think being in nature is curative—as well as how to take advantage of it even in more urban settings.

“When I walked along the beach and heard the rhythm of the tide and saw the eagles and herons soaring above, I felt liberated, unburdened for the first time in months,” says writer Sarah Pollock, of her first visit to her mother’s beachside home.

Sarah’s reaction makes sense, says Wallace Nichols, PhD. “Living things crave water, and honestly we flourish when we’re near it,” he says, explaining that seeing or even hearing water triggers a flood of neurochemicals that increase blood flow to the brain and heart. “It’s instantly calming,” he says.

A 2020 review of research on the human-water connection concluded that being in or near water had a direct positive impact on mental health—in one study, even just standing in front of an exhibit in an aquarium was enough to lower heart rate and lift mood. A newer study from the UK found that participants from low-income households were 40% less likely to exhibit symptoms of mental illness when they lived near water compared with those at the same income level who lived farther inland.

Nichols explains that this is because back when our ancestors were on the move, finding water was a matter of life or death, so hearing or seeing it is enough to ease the mind; floating or swimming has been shown to almost immediately produce a meditative state.

The best news is that achieving “blue mind”—the term researchers commonly use to describe the peaceful state induced by proximity to water—is very simple, says Nichols. We reap the benefits, to different degrees, whether we take a long swim in a lake, stare out at crashing ocean waves, listen to a trickling brook, or just sit on a bench by a pond watching ducks swim by.

“Do what works for you, and do it as often as possible,” he says, adding that even on days when you can’t get outside, you can help yourself breathe easier by taking a shower or a bath or by staring at a photo or painting of, say, dolphins swimming, especially if it reminds you of a particular body of water that brings you joy.

2. Feeling small and full of awe

While the peace and quiet of nature certainly soothes our senses, the overpowering immensity of the great outdoors can be just as calming. Tabitha Dosch, a communications specialist, was speeding down a bike track near her house one day last summer when, as she got to the top of a hill, a giant kangaroo appeared in the middle of the path. They stared at each other for a few moments, and when the kangaroo finally ran off, Tabitha burst into tears: “I wasn’t scared so much as overwhelmed by his size and beauty. I felt transported and had this ‘everything’s OK’ feeling that lasted all day.”

Even something as simple as watching plants emerge in your backyard can create a sense of awe. “Out hiking or even just puttering in my garden, I find myself deeply amazed by things like the moss on the trees and the rocks, the lichens, the many types of mushrooms—and I think about all the things nature does to survive and adapt,” says Deb Stemmerman, an obstetrician.

Experts say that what these women experienced was awe, an exhilarating, sometimes even slightly frightening wonder that wells up when we encounter something beyond the bounds of our everyday experience. That emotion can be a powerful boost to mental health, and the benefits tend to last, says Jennifer Stellar PhD, a researcher in health and emotions.

Research is confirming this phenomenon: A US study, found that disadvantaged youths and returned soldiers who went white water rafting in a beautiful but rugged setting described wonder that went beyond the thrill of the ride—they reported higher levels of well-being and less stress a week later.

Stellar explains that awe deepens our feeling of connection to the earth and to other creatures. We fade away into the moment, experiencing that feeling we describe as being “one with nature,” Stellar adds. Trying to comprehend the immensity, she says, overpowers the ego, which is usually busy narrating our lives, often with negative chatter. Feeling that you are a small part of something larger quiets that voice.

No need to book a trip to Kakadu to experience awe—it’s more a matter of slowing down and noticing these wonders rather than blowing right past them. Pulling over to really appreciate a rainbow can provide that dose of well-being. Visit a small oasis of natural beauty you live near but may have taken for granted—a bush reserve, national park, or a rushing creek. Or simply zoom in on the beauty of a butterfly or a flower in your window pot to take in how extraordinary it is. “Details like the shiny filaments that make up a butterfly’s wing can be mind-blowing,” Stellar says.

Have you ever really noticed the way tree branches, well, branch out, getting progressively smaller? Or how the sun’s rays glint on a lake, or how the flames of a campfire crackle? Most of nature is made up of monotonous but soothing shapes or movements like these that repeat endlessly at finer and finer scale. Those patterns are called fractals, and they offer yet another way of soothing the soul.

In fact, when researchers asked participants to view the types of fractal patterns found in nature, electroencephalograms (EEGs) revealed that alpha waves peaked in the frontal region of the brain and beta waves peaked in the parietal region—indicating that looking at nature is both relaxing and restorative.

Taylor explains why our visual systems, having evolved over millennia in nature, are still soothed by these repetitive patterns: Much of the natural world—leaves, patterns in the sand, clouds, roots, branches, waves washing in—is made up of fractals, and historically, if that was all we saw, it meant that there were no predators darting into the landscape or lightning bolts threatening to strike us. In other words, we were safe. “We call it fractal fluency, or ‘effortless looking,’ and more than just reducing stress, taking in fractals is actually restorative,” he says.

Fortunately, getting the restorative benefits from these patterns requires very little effort—just stare into nature, whether up at the clouds or at the veins of a leaf. Even short daily doses of this kind of “effortless viewing” will help, but to really rack up the benefits of nature’s patterns, Taylor suggests heading to the beach or the backyard with a sketchbook and a pencil in hand—no artistic talent required. Drawing what you see in nature can magnify the calming effect the patterns have on our brains, says Taylor, who has studied how some artists, such as Jackson Pollock, subconsciously embedded fractals into their work. “Creating is good for everyone; when you aren’t just passively looking, but actively re-creating nature on paper, the fractals flow in through your eyes and out through your fingers, and your whole body reaps the benefits,” he says.

4. Light your own way

As at ease as we feel amid greenery or near water, it might be the warm rays of the sun that give us the greatest lift. TV presenter Renee Nelson explains a combination of worry, exhaustion, and being away from her family and co-workers took a toll. “Studios often have no windows,” she says. “I struggled to know what time of day it was and found myself battling some really dark feelings.” Her mood began to lift once she started taking walks outside between shows: “I’d lift my face to the sun to prove to my brain that it was actually daytime, and it made me feel so much better. I started to sleep well again too.”

Exposing ourselves to sunlight—especially in the bright morning hours—works to orient our bodies, regulating the biological clock that sits in the hypothalamus and controls, among other things, when we wake up and fall asleep. That, in turn, has a positive effect on everything from hormones to brain chemistry.

Helen Burgess PhD, a sleep and circadian researcher says, “Studies show that even a small shift later can lower our mood. Getting out in the morning light for 30 minutes every day is enough to shift it earlier.” (Burgess points out that even an overcast day will provide more intense light than you can typically get inside your home.) That helps regulate sleep and consequently your mood.

In fact, research connecting bright light to mental health has gone into overdrive in recent years. One study showed that bright-light therapy was as effective for treating major depressive disorder as antidepressants were. Burgess herself stumbled upon data supporting this when returned soldiers who were participating in a study of sunlight and chronic pain reported reduced symptoms of PTSD (Post Traumatic Stress Disorder). A subsequent clinical trial confirmed that half an hour to an hour of morning light indeed had a significant impact on mood.

But while morning light has the greatest impact on circadian rhythms, Burgess says spending time in the sun at any hour of day is beneficial. “There’s evidence that sunlight can immediately increase serotonin levels in the brain,” she explains.

She suggests finding time each day to get outside. “Short breaks give you a serotonin boost and make cortisol levels drop. So walk the dog while the sun is up, take a few calls outside, or enjoy a leisurely stroll around the block,” she says. “It will help you feel good in the world again.”

This article originally appeared in the July 2021 issue of Prevention USA.

I have read and accept the privacy policy and terms and conditions and by submitting my email address I agree to receive the Prevention newsletter and special offers on behalf of Prevention, nextmedia and its valued partners. We will not share your details with third parties, and will only share delivery information in the event of you being a prize winner.
This article originally appeared on prevention.com
© prevention.com
First published: 16 Jun 2021
Tags:  exclusiveshealthmentalnutrition/wellnesspremium